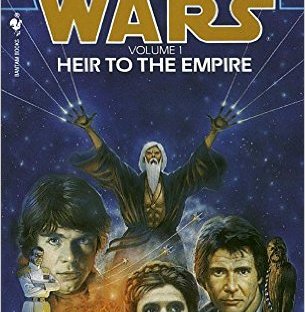 Over at The Next Best Book Club we are celebrating Sci Fi month with a post of our favorites! I’m not a huge Sci Fi nut, but I can proudly say I’ve read a zillion Star Wars novels. Here is my excerpt, plus a link to the full post if you are in need of some great recommendations.

From The Next Best Book Club

I’m not so much a Sci Fi fan as I am a huge Star Wars fan; I’ve read nearly 70 Star Wars books and counting. The Thrawn Trilogy (Heir to the Empire, Dark Force Rising, and The Last Command) by Timothy Zahn is truly a defining piece in the Star Wars Extended Universe (that Lucas Arts is now calling the Legends series). This series introduces not only a new key character to Han, Luke and Leia, but also a hauntingly unique villain. Every reader/Star Wars fan needs to get their hands on this series, whether in print our audio.

Now and Forever: Somewhere a Band Is Playing & Leviathan ’99

Or, The Martian Chronicles. Or basically everything by Ray Bradbury. I know he’s mainstream, not a hidden gem, but his science fiction is so well written, so clear, so inventive without being crazy. I particularly like Now and Forever, which is a set of two very different novellas. The second of the set, Leviathan ’99 is a retelling of Moby Dick, but in space. Enough said, right?