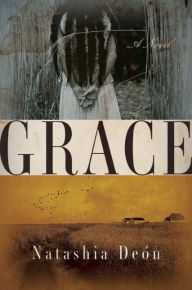 Grace, Natashia Deon’s debut novel from Counterpoint Press, is an emotional tour de force and an absolute must read. That may seem like a bold statement, but when a book balances the Civil War, racism, abuse, and a ghost story with almost effortless beauty, it is an accurate one. The novel is told from the point of view main character Naomi as she navigates her terrifying life as a child living in slaves quarters, a runaway teenager working in a whore house, and an ever watchful mother. Her daughter Josie is both blessed and cursed because of her parentage, as she too finds herself straddling two different worlds. Despite being separated by Naomi’s death, and the collapse of the South, their two lives intersect in the most unexpected, meaningful ways.

Deon creates a rich and diverse world in the South both before and after the Civil War. There are no stereotypes here: not in the woman who comes to own Josie, not in the madam a who runs the whore house, not in the blacksmith, not in the piano player. Each character is far more than their race, their religion, or the job that they hold. Even the most passing character feels like a flesh and blood person, weighed down with their own past and their own failings. The issues in Grace reach right down to what it means to be good, to be human, and to overcome. Considering the fact that the story spans two lifetimes, two states, and a whole host of tumultuous events, it is quite an achievement to craft the many multidimensional characters that populate this novel.

Without giving away too much of the plot, the bulk of the story is told by Naomi after she has died, and it jumps between her actual life and her spirit life. Allowing readers to see Naomi’s life, her death, and her ability to reflect on both of them is part of what makes this story unique. Everything is convincing; it seems right and logical and necessary to see both Naomi’s life and to watch her watch Josie’s life. This is a tall order to juggle as a reader, and a writer, but once you get into the rhythm of the book, it sweeps you away. The story encompasses many small details — who lives where, who knows whom, who passes who else in the forest — all of which eventually build into a startling climax. I finished Grace in almost one night because toward the end, it was nearly impossible to stop reading.

Hearing the story from Naomi’s perspective allows readers to encounter a lot of period language and slang, which helps you get into the setting and the mindset of the time. She is a self taught woman, having had only life and the Bible to guide her, so her speech and thoughts evolve in an organic way as the story progresses. It may take some readers a few pages to nail that voice in their heads, but I found that it made the book even more immersive. The attention to detail, from the way cellars and floor boards creak, to the minutia of doing laundry and cleaning, help remind readers of the way so many of us used to live. With thoughtful use of historical facts and details, along with vivid descriptions of the landscapes, I was always surprised and engaged.

I was able to get a hold of an advance ebook copy, but I plan on heading out to add the hard cover to my shelves at home. You should probably do the same, since soon enough everyone should be talking about Grace.

Grace is available in stores and online now.